Locals and visitors enjoy our community. There are many opportunities to dine, stay and play:

Everything you need to know about relocating whether personal or starting a new business:

Weâve been around since 1945 and serve to keep our community businesses strong. Check out the many programs offered:

You are welcome to participate!
Carson City government recognizes the importance of a healthy business community to a healthy residential community, and strives to create an environment where the two can flourish in harmony.
In 1969, Ormsby County and the City of Carson consolidated to form the present combined municipality of Carson City. The city is governed by a mayor and four-member Board of Supervisors, all elected to overlapping four-year terms. An appointed City Manager performs administrative functions and oversees city staff and departments. The Board of Supervisors has an open-door policy and solicits community representation and involvement through various city advisory boards, commissions and committees. Most meetings are televised on the local cable access channel for those who cannot make it to the open-door meetings.
The Carson City Fire Department operates three stations in the community with approximately 60 employees, and also operates the ambulance service. 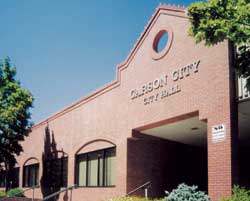 The Carson City Sheriff’s Office keeps the peace, and enforces the laws and ordinances of the city with over 115 officers and deputies.
Because Carson City is a capital city, when the state legislature is in session the city is alive with activity. The state legislature meets every other year and offers a visitors gallery for those interested in seeing Nevada history in the making. Living in Carson City gives us a rare opportunity to be very participatory in our state government.
The Vision Statement of Carson City Government
Proud to be Nevada’s State Capital, Carson City will perpetuate its heritage, cultural diversity, and natural setting by providing a diversified and well-planned community for people of all ages and backgrounds. We will work together under an open government process to guarantee the best possible environment of public safety, a strong economy, and an effective infrastructure. Quality education and recreation will provide our citizens with a sense of well-being and personal freedom. Carson City will continue to be a leader in effective local government.